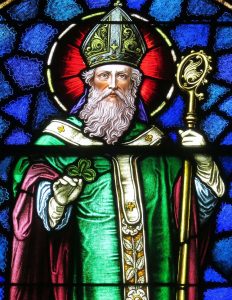 Saint Patrick was a Christian missionary and Bishop in Ireland. The date of his birth is not known but he was an active missionary in Ireland during the late 450’s. He is called the founder of Christianity in Ireland.

Patrick was born in Roman-controlled Britain. His father was a deacon and one of his grandfathers was a priest. When Patrick was 16, he was captured by a group of Irish pirates. They were held captive for six years. While captive, he worked shepherd and strengthened his relationship with God becoming a Christian.

He was eventually able to escape after having a dream from God telling him to leave by going to the coast. He traveled 200 miles to aboard a boat, sailed for 3 days, and walked for 28 days. Nearly starving to death, he prayed and found some wild boars. The visions made him study for the priesthood. At 43, he was ordained a bishop. He had a dream that all the children of Ireland were stretching out their hands to him. He understood vision meant he was to take the Gospel to Ireland.

Patrick arrived in Slane, Ireland on March 25 433. There are several legends about what happened next. One story says he met the chieftain of one of the druid tribes, who tried to kill him. God stopped the chieftain. Patrick was able to convert the chieftain and preach throughout Ireland. He often used the shamrock to explain the Trinity and kingdoms were converted to Christianity after hearing Patrick. Patrick preached and worked in Ireland for 40 years. He ordained many priests, divided the country into dioceses, and founded many monasteries. He did many miracles and wrote of his love for God. After years of living in poverty and traveling, he died on March 17, 461.

Saint Patrick is the patron saint of Ireland and Engineers.