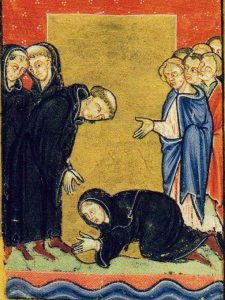 We don’t know exactly when Saint Cuthbert was born. It is believed to be around the year 637.  His family was probably from the noble class.  We do know he was a shepherd for a time in the north of Britain. He decided to become a monk after a vision the night Saint Aidan died. He was educated and wanted to go to Melrose Abbey and become educated. For a time, he was a traveling priest in remote villages, until he ended up at Lindisfarne. It was an island abbey, where he eventually became the prior.  He became known for his piety and obedience. He continued his missionary work and gained a reputation for healing.  This caused people to call him the Wonder Worker of Britain.

The attention caused him to want complete solitude. He spent more than 10 years as a hermit.  Britain was getting close to complete paganism and he wasn’t allowed to stay in complete seclusion. He was elected to be the bishop of Lindisfarne. He gradually helped the people leave their pagan practices. For the last two years of his life Cuthbert was Bishop of Lindisfarne.  When he knew he was near death, he asked to be returned to Farne.  He died March 20, 687.

In England, Saint Cuthbert is the patron saint of the North.