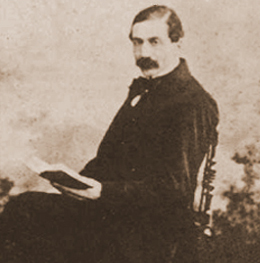 Francesco Faa di Brunow was the youngest of twelve children. He was born into a noble Italian family. His father was Louis, the Marquis of Bruno. He lived during a time when many people did not support the Catholic Church or the Pope. He was trained in mathematics geography, surveying, and cartography.  Surveying is recording an area to plan for a map. Cartography is the science of drawing maps. He became a military officer in the Army of Savoy. He was asked and agreed to tutor the King’s sons. This angered many people because Francesco was openly Catholic. He soon left military life behind.  In 1853, he earned a doctorate from the Sorbonne in mathematics and astronomy. He also studied religion and asceticism. Asceticism is the choice to live with self-discipline usually for religious reasons. Even though he was incredibly busy studying, he was involved in several charities. He created a home for unmarried mothers and others.  He helped the elderly and poor. He even oversaw the construction of a Church. He later went to work at the French National Observatory in 1855.

He was well into adulthood when he decided to become a priest.  He has to receive permission of Pope Pius IX because his archbishop denied him.  He was ordained a priest at the age of 51. He died on March 27, 1888, and was beatified by Pope John Paul II in 1988.

Faith – Faa di Bruno’s open faith cost his a job tutoring.  He also had to overcome opposition to becoming a priest from his own archbishop.  He believed in what he was doing and is now on his way to becoming a saint.

Science —  Faa di Bruno invented some scientific apparatus.  He also made many important contributions to mathematics.  He is known for a chain rule to higher derivatives in Calculus.